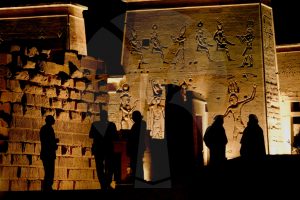 Visitors are silhouetted against the 4th century BC Temple of Philae located on the island of Agilkia near Aswan in Upper Egypt. According to ancient pharaonic history, Philae is the resting place of the God Osiris – the god of the Afterlife – and is dedicated to his wife, Isis, who recomposed his scattered limbs and resuscitated him. The temple was disassembled in the 1970ties and moved to another island to prevent it from being lost to the fluctuating waters of the lake between the two dams in Aswan. Photo by Michael Nelson